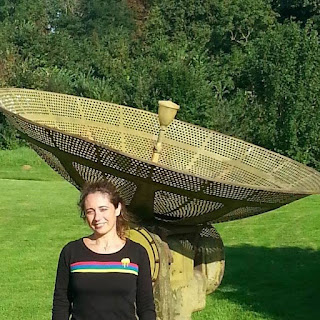 Daniela de Paulis is an interdisciplinary artist based in The Netherlands. She exhibits internationally, www.astron.nl) where she developed, together with the CAMRAS and the ASTRON team, a technology called Visual Moonbounce. She is currently a guest researcher at ASCA (Amsterdam School for Cultural Analysis), University of Amsterdam, developing her research on Interstellar Transmissions. Since 2010 she has been collaborating with the international collective Astronomers Without Borders (AWB), as the founder and director of the AstroArts programme. In 2013 she founded Cabine Voltaire, a pioneering online, collaborative platform for live debates on science, technology and the humanities.
often collaborating with other artists, scientists and radio amateurs. She holds a BA from the Academy of Fine Arts in Rome, Italy, and a Master Degree in Media Arts from Plymouth University, UK. Since October 2009 she is the first artist in residence at the Dwingeloo radio telescope and ASTRON (

She has published her work with the Leonardo MIT Journal, Inderscience, Acta Astronautica and Cambridge University Press. She is a member of the international SETI (Search for Extraterrestrial Intelligence) committee as the speaker for SETI and culture. More information on her work can be found on www.opticks.info and www.danieladepaulis.com